Amid delivering anti-gang violence projects for the Home Office and Birmingham’s Violence Reduction Unit, Simeon questions the rigour of research polls narrated by the Black Lives Matter movement, post-George Floyd: ‘I welcome and champion positive social change – but why is everyone speaking up for anti-racism now? The years of silence speak volumes to me. Systemic racism is not new. Hence, how can media polls genuinely capture viewpoints when everyone is so enraged? Are polls unsuspectingly capturing media-inspired emotions to merely mollify the public mood in place of a truthful rational outlook?’.

Outraged by the deaths of Black people, at the hands of police officers and citizens, caused by a system that treats Black people as expendable, Simeon Moore added: ‘Only through the destruction of racism and the creation of diversity can we, as students, lead, learn and live in an increasingly globalised world.’ 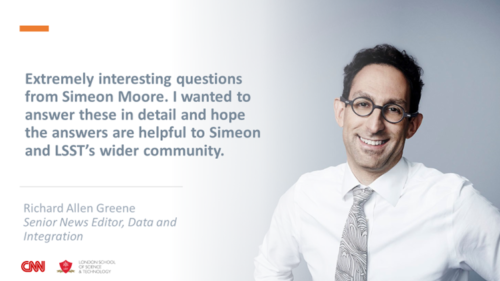 1. MOORE: Why did you decide to conduct a poll on Britain’s race divide?

GREENE: We did this project in response to the killing of George Floyd and the way that his death re-ignited the Black Lives Matter movement around the world, including in Britain. CNN has a large bureau in London (the largest CNN bureau outside of the United States) and is very interested in the British situation. The toppling of the Edward Colston statue in Bristol and UK BLM protests in London and elsewhere showed us that the story resonated here with Black people and allies very strongly, which suggested to us that there was an untold/under-reported story here which we could uncover if we did some investigating of our own.

We wanted to highlight that the United States is not the only country with a legacy of racism and slavery to reckon with – Britain and Europe were deeply involved in slavery and colonialism too. I should give a special mention to Gabrielle Smith, who is one of our graphic designers – it was her idea to release our story on Windrush Day, when this country was focused on racial injustice perpetrated here. Gabrielle is herself a child of the Windrush generation and was one of our main thinkers on this project, as well as designing the montage image that led the main story (see the graphic HERE).

2. MOORE: How did you go about it? Tell me about your methodology?

GREENE: CNN has a long history with a polling agency called ComRes – we have been working with them for more than 10 years, both on smallish daily news projects like this one about the invasion of Crimea and on big investigations like this one about anti-Semitism in Europe. So, once we decided that we wanted to investigate race and racism in Britain, it was obvious to us that we would work with ComRes – which has recently been bought by another company, so now it’s called Savanta ComRes.

One thing we did differently in designing this poll is that we had a very wide-ranging company brainstorm about what questions we wanted to ask. I invited people far outside our usual London editorial circle to contribute questions to the poll, and made a particular effort to get questions from Black and Asian colleagues. We also made an effort to formulate questions that would really force people to take sides on controversial questions, and finally, we made a point of what’s called “oversampling” BAME respondents. That means that instead of just polling 1,000 people as we usually do, and assuming that we would get a representative sample of BAME responses, we polled 1,500 people in order to be sure that we had enough BAME responses to be statistically significant. We then went farther, separating out Black responses from other ethnic minority responses, and found that Black responses tended to be notably different from all BAME responses lumped together. That enabled us to compare the responses of Black people and White people in a meaningful way.

3. MOORE:Did you find it hard to balance your emotive stance with the rational aspects of the research design?

GREENE: This is what we do as journalists all the time. Facts first.

4. MOORE:How did you balance your resources – time, money; people?

GREENE: Because of Gabrielle’s idea of releasing our story on Windrush Day – less than a month after George Floyd was killed – and because BLM was generating so much passion in the United States and Europe, we moved much, much faster on this project than we normally would. In ordinary circumstances, we might spend months on a poll-driven investigation like this. (We did spend months on the anti-Semitism one I mentioned above.)

This project, we turned around in two weeks from concept to publishing/broadcasting. Honestly, it’s a little bit of a blur but we did have dozens of people pitch in, from top management discussions about the parameters and funding of the project, to the discussions I mentioned with CNN staff around the world about what questions we should ask, ComRes experts turning our questions into a proper scientific poll, doing the research and turning it into tables for us (see HERE for the full results – 187 pages!), a top television correspondent going out into the field with a producer and photojournalist to film a video package (the 7-minute video near the bottom of THIS PAGE – a video more than twice as long as our normal TV reports), digital and television graphic designers creating the charts, me writing the main story and colleagues writing related stories, editors working through the weekend. I’ve rarely worked on such a big project that came together as quickly as this. 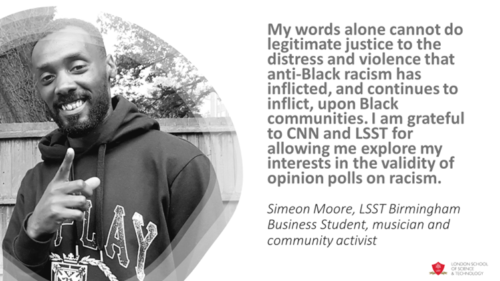 GREENE: We have been working with them for 10+ years now. Normally we have an idea for something we want to investigate, they tell us how much it would cost and how long it would take to get results, we decide if we want to go ahead with it, and then we brainstorm questions we want to answer. They turn our questions into a formal poll and send us the results – a summary of the most important findings plus a comprehensive report like the 187-page one I linked above.

6. MOORE:Your sample size shows a skew towards White respondent numbers. Is there any particular reason for this?

GREENE: In fact, as a proportion of the population, we polled more BAME people than White people. (Remember that England & Wales is 86% White, according to ONS, while our survey respondents were closer to 66% White.)

7. MOORE:You have presented the research rather clearly – what programme did you use to do this?

GREENE: We used HTML, CSS and Javascript, with charts made by our own CNN graphics team.

8. MOORE: Your questions create high-impact. How did you go about deciding what to ask?

GREENE: A big brainstorm, taking in a much larger group of CNN people than we normally do, and making sure we had BAME contributions in the question design.

GREENE: Ideally, you want to uncover startling data that will produce a headline. You don’t want to tell audiences something they already know – you want them to say, wow, I did not know that. One interesting response to our Confronting Racism poll – White audiences were surprised by our findings. Black audiences were not. I guess that itself is no surprise.

10. MOORE: What tips do you have on asking the right questions in a poll?

GREENE: Force respondents to take sides on an issue. Make the questions about something real, not theoretical. Not to say we are so clever, but another poll came out in the UK around the same time as ours which asked if people would be happy for their child to date someone of a different race. That is a theoretical question, and anyone but a serious racist knows what the “right answer” is, so it’s easy to tell a pollster, ‘Yeah sure that would be fine by me’. Our questions were much more practical: Have you been treated with a lack of respect by the police? Should statues of slave traders be removed by protesters? Is the Conservative Party racist? …. You see the difference. Also, have a thesis and use your questions to test the thesis. Be prepared in case your results do NOT support your thesis.

11. MOORE: Your poll makes interesting points that need urgent action – will CNN do anything further with the findings?

GREENE: We will continue to use these findings in our reporting any time race in Britain is in the news. We have continued to add stories to our Confronting Racism page. And we have a big series coming around Black History Month…. Starting soon!

Mr Mohammed Zaidi, LSST’s Deputy CEO, hailing Simeon’s work with CNN, said: ‘Over the last several months, LSST students, staff, and alumni have been particularly spurred and inspirited by the Black Lives Matter movement reassembly and its anti-Black racism call for action. It remains our collective responsibility to make LSST a force for good in each of the communities we operate. By communicating the diverse voice of our student views on racial divides and racism, we hope to utilise our collective knowledge and passion in support of creating a more just academic community. We continue to thank CNN for inspiring and uplifting our students over the years and look forward to working together again soon.’

Editor’s note: LSST is not responsible for content on external links. Opinions and quotes belong to, and represent, respective contributors and not LSST.